On the 8th of September, 2021, representatives of BelMAPE in the person of rector of the Academy, Candidate of Medical Sciences, associate professor Alexei Chukanov; vice-rector for clinical work, Candidate of Medical Sciences, associate professor Andrei Platonov; head of the Department of International Relations of BelMAPE Sergey Kozachenko, took part in an online meeting with the administration of Russian Medical Academy of Continuing Education. 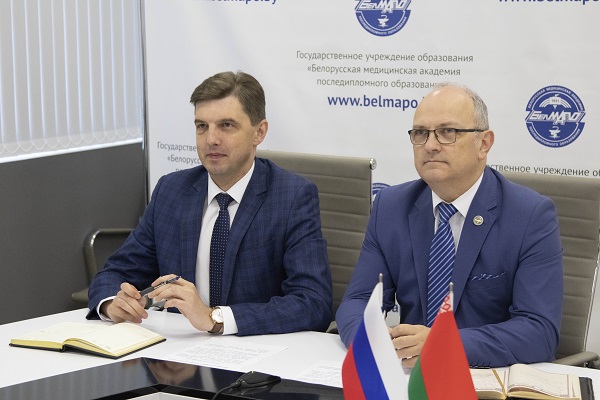 At the meeting, rector of BelMAPE Aleksei Chukanov invited the administration of Russian Medical Academy of Continuing Education and personally rector Dmitry Sychev to take part in the official events dedicated to the 90th Anniversary of BelMAPE. They also discussed the participation of the colleagues from the Russian Academy in the Republican Scientific and Practical Conference with international participation "From the origins to the achievements of the XXI century", dedicated to the celebration of the 90th Anniversary of BelMAPE.

During the meeting, the parties discussed the prospects of further cooperation between the Academies on the organization of simulation training for specialists.

The representatives of the Russian Academy shared their experience of functioning of the Federal Accreditation Center, and also talked about the possibilities of training and certification of specialists from the teaching staff.

The meeting was conducted in a businesslike and constructive atmosphere.

The Final Meeting of the School of Health Organizer in 2022

09 Dec 22
Our website uses anonymous data transmitted using cookies. 🍪 All your information is stored securely and is not shared with the third parties.