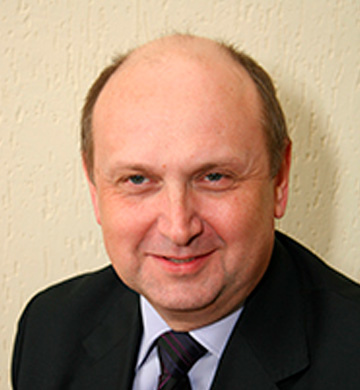 Aleksandr Guminsky has been working at the Department of Ultrasound Diagnostics from the time of its foundation, since 2006.

In 1993, Aleksandr Guminsky graduated from Minsk State Medical Institute with a specialty in Pediatrics. He started his career as a physician at Minsk City Clinical Oncology Dispensary. In 1997, he got a promotion, starting to work as head of the Ultrasound Unit of Minsk City Clinical Oncology Dispensary. He specializes in ultrasound imaging, oncology, mammology, laser surgery. Aleksandr Guminsky undertook internships at different leading oncology centers abroad (Austria, Russia, Germany).

In 2012, he defended his Candidate’s thesis entitled «Ultrasound imaging for detection of tumors and tumor-like thyroid diseases».

In 2013, he was awarded the academic title of an associate professor.

His main scientific interests are the following ones: radiology and minimally-invasive surgery in oncology. He was the first one in the Republic of Belarus, who started to use the techniques of nonpalpable tumor biopsy from the superficially located organs under x-ray of ultrasound control, which he implemented into clinical practice.

Aleksandr Guminsky is an author and coauthor of 1 monograph, 42 scientific works, 3 patents for use, 4 instructions for use, and 3 rationalization proposals. The results of his scientific researches have been shared within his participation at 23 scientific forums, not only in Belarus, but also abroad.

He is a member of the Belarusian and European Societies of Radiologists.

Last edit 2020-12-11 10:11:11
Our website uses anonymous data transmitted using cookies. 🍪 All your information is stored securely and is not shared with the third parties.