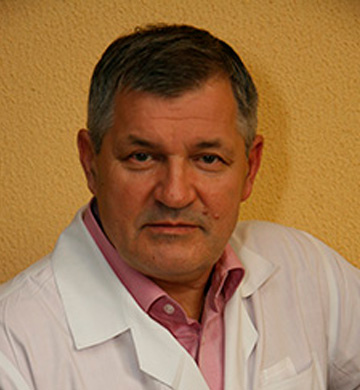 Aleksandr Volosheniuk was born in the village of Kolodeevichi of Brest region. In 1966 he finished an eight-year school in Okhovsk. From 1966 to 1970 Aleksandr Volosheniuk studied at Pinsk Medical College, which he finished with a distinction. After finishing the college he worked as a physician’s assistant in an outpatient clinic in the village of Svyataya Volya in Brest region. From 1970 to 1972 he did military service in the Soviet Army. Afterwards, in 1973, he worked as a head of a feldsher-midwife station in Pinsk region.

In 1979 Aleksandr Volosheniuk graduated from Minsk Medical Institute, the Faculty of General Medicine, with a distinction. From 1979 to 1980 he did an internship in traumatology, and then he had been working as a resident doctor at Traumatology Unit until 1984. From 1984 to 1999 Aleksandr Volosheniuk was in charge of Traumatology Unit of Minsk City Clinical Hospital № 6. From 1999 to 2002 he worked as a deputy chief doctor of Minsk City Clinical Hospital № 6. Apart from his work at Traumatology Unit, Aleksandr Volosheniuk also gave lectures at the Department of Traumatology and Orthopedics, Department of Military Service of Belarusian State Medical University, worked there as a junior research worker and then - as a senior research worker. He is a physician of the highest qualification category on the specialties «Traumatology» (1993), «Healthcare management» (2002).

In November, 2002, Aleksandr Volosheniuk got the academic title of an associate professor; from 2003 to 2004 he worked as a head of the Department of Disaster Medicine of Belarusian Medical Academy of Postgraduate Education. Since December, 2004, Aleksandr Volosheniuk has been working as an associate professor at the Department of Emergency Care and Disaster Medicine of BelMAPE.

In 1990 Aleksandr Volosheniuk defended his Candidate’s thesis entitled «Treatment of open communicated fractures of lower-leg bones». He got his academic title of an associate professor in 2004.

His main scientific interests and researches: degenerative dystrophic diseases of joints, medical care at polytrauma and combined injuries. He developed and performed hip joint endoprosthesis (two-stage) at congenital dislocation of the hip, osteosynthesis at hip periprosthetic fracture with the strengthening of the thigh bone at osteoporosis. He was the first physician in Belarus, who performed hip arthroplasty at haemophilia. In his practice, he widely applies «bloodless» treatment methods during total hip and knee joint replacement and operations on large bones.