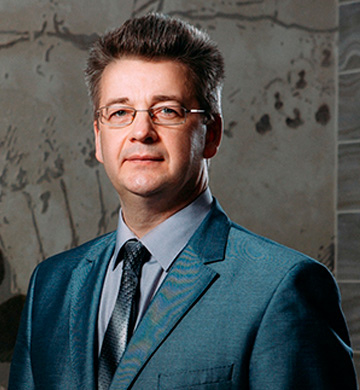 1995-1999: physician at the Unit of Functional and Ultrasound Diagnostics of Vitebsk Regional Diagnostics Center;

Since 2011 until the present: senior research scientist of the group of diagnostic radiology at N. N. Alexandrov National Cancer Centre;

Since 2013 until the present: associate professor of the Department of Ultrasound Diagnostics of Belarusian Medical Academy of Postgraduate Education;

In 2009, he defended his Candidate’s thesis entitled «Multifocal biopsy under transrectal ultrasound control in the diagnostics of prostate cancer»;

In 2008, he did retraining courses on the specialty Radiodiagnostics.

Andrei Karman is deeply involved into scientific and research work. His scientific researches are mainly devoted to the development of complex methods of radio- and ultrasound diagnostics of cancer.

In 2015, he got the academic title of an associate professor on the specialty «Clinical Medicine».