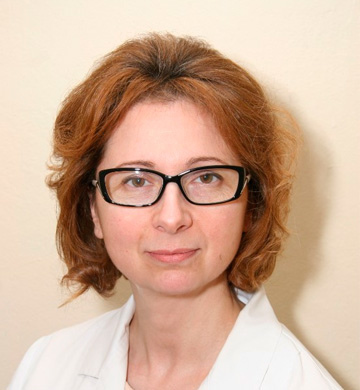 Elena Lapteva was born in 1966. In 1990, she graduated from Minsk State Medical Institute in general medicine. She worked as a pulmonologist at the Republican Hospital of the Committee for State Security. In 1996, she finished clinical residency at the Department of Phthisiopulmonology of Belarusian Medical Academy of Postgraduate Education. In 2000, she defended Candidate’s thesis. Afterwards, she worked as an assistant, and then – as an associate professor of the Department of Phthisiopulmonology. From 2007 to 2008, she worked as a chief general practitioner of the Ministry of Health of the Republic of Belarus. In 2008, she got the academic title of an associate professor. From 2008 to 2009, she worked as a deputy head doctor for clinical work at the Belarusian Republican President’s Medical Center. In 2014, she defended Doctoral thesis in pulmonology; in 2017, she got the academic title of professor. In 2016, she got a reward for the excellence in healthcare of the Republic of Belarus. Elena Lapteva is an author of 200 scientific works. Her scientific interests include the following: diagnostics and treatment of nonspecific respiratory diseases and lung tuberculosis; implementation of high technologies into pulmonology.

Last edit 2020-12-16 10:39:16
Our website uses anonymous data transmitted using cookies. 🍪 All your information is stored securely and is not shared with the third parties.