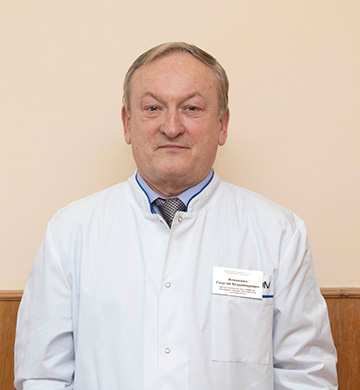 Doctor of Medical Sciences, professor, anesthesiologist and intensivist with the highest qualification category

In 1989, Georgy Ilukevich defended his Candidate’s thesis entitled «Extracorporal hemosorption in the complex treatment of syndrome of «activation» after replantation of major segments».

In 2004, he defended his Doctoral thesis entitled «Pathogenetic substantiation and efficiency of complex intensive therapy of widespread peritonitis».

Scientific interests: development of anesthesia methods during operations and intensive therapy of purulent infections. He is an author of more than 300 scientific works, including 4 monographs, 6 inventions, 18 rational proposals.

Georgy Ilukevich got a reward for excellence in healthcare; he was awarded a medal of Francisk Skorina, honorary diploma of the National Assembly of the Republic of Belarus, honorary diplomas of the Ministry of Health and Ministry of Education, Minsk Regional and City Executive Committee, BelMAPE, presidential scholar.

Last edit 2021-08-20 09:20:32
Our website uses anonymous data transmitted using cookies. 🍪 All your information is stored securely and is not shared with the third parties.