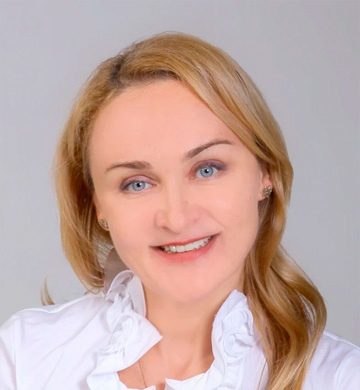 Irina Abelskaya was born in 1965. After the graduation from Minsk State Medical Institute (Pediatrics Faculty) in 1988, she started her internship at the 3rd Pediatric Clinical Hospital of Minsk (1988-1989). In 1989 she started to work as a pediatrician at the 25th Pediatric Polyclinic of Minsk, where she had been working for 3 years. From 1992 to 1994 she worked as an endocrinologist at the City Endocrinology Dispensary. From 1994 to 2001 she continued her career working as a therapist at the Republican Hospital of the President of the Republic of Belarus. Since 2001 until the present she has been working as a chief physician of State Establishment «Republican Clinical Medical Center » of the President of the Republic of Belarus.

She prepared 3 Candidates of Medical Sciences.

In her scientific works, Irina Abelskaya was involved in the development of the latest technologies of ultrasound diagnostics. She revealed diagnostic efficiency of the means of X-ray visualization in respect to neurologic manifestations of cervical vertebral osteochondrosis and their importance during evaluation of degenerative-dystrophic changes. It has been proved that a complex X-ray examination of the cervical spine improves the quality of diagnostics, particularly, it can help to make a more accurate evaluation of degenerative and dystrophic changes and determine their significance at the stage of medical rehabilitation planning and during the medical rehabilitation itself, and also to predict neurological complications. Distribution of patients within clinical and rehabilitation groups makes it possible to apply an effective staging system of rehabilitation of patients and disabled ones with neurological manifestations of cervical vertebral osteochondrosis.

Last edit 2020-12-04 10:44:26
Our website uses anonymous data transmitted using cookies. 🍪 All your information is stored securely and is not shared with the third parties.