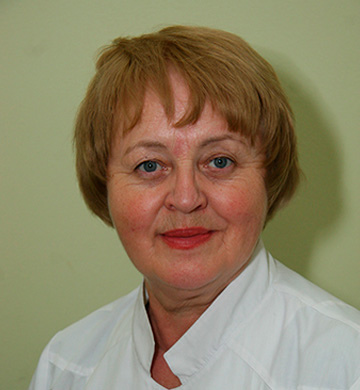 In 1976 Irina Atroschenko graduated with distinction from Vitebsk State Medical Institute on the specialty «General Medicine». From 1980 to 1989 she worked as a scientific researcher at the Republican Scientific and Practical Center for Cardiology. From 1989 to 1999 she worked as an assistant at the Department of Therapy of State Educational Establishment «Belarusian Medical Academy of Postgraduate Education». Since 1999 until the present she has been working as an associate professor at the Department of Therapy.

Irina Atroschenko is a doctor-therapist of the first qualification category.

Irina Atroschenko is actively involved into scientific work. In 1988 she successfully defended her Candidate’s thesis. She is an author of 123 scientific works, among them there are 7 monographs in co-authorship, 9 manuals for doctors, 4 study guides, 28 articles, among them 4 articles have been published abroad, 1 patent. In 2006 she graduated from Minsk State Linguistic University, a special faculty. She has good speaking skills in English. Annually, she participates at European and Russian congresses for cardiologists, after which she applies the received knowledge in lectures and during practical sessions, seminars, conferences, taking place at different regions of the Republic of Belarus.

Last edit 2020-12-07 12:24:55
Our website uses anonymous data transmitted using cookies. 🍪 All your information is stored securely and is not shared with the third parties.