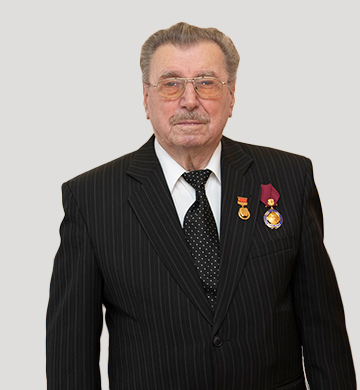 Doctor of Medical Sciences, professor, anesthesiologist and intensivist with the highest qualification category

Ivan Kanus was born in the village of Rybolovo of Dyatlov district (Grodno region). In 1949, after finishing seven grades of secondary school, he was admitted to Baranovichi Obstetric School, which he finished in 1953. That year, he was drafted for navy military service. He did his military service as a physician's assistant. Until 1958, Ivan Kanus had been working as a physician's assistant at Dyatlov Central Regional Hospital. From 1958 to 1964, he studied at Grodno Medical Institute. After the graduation, he started to work at Belarusian Scientific and Research Institute for Oncology and Medical Radiology.

From August, 1964 to May, 1982, Ivan Kanus worked as an anesthesiologist and intensivist at Scientific and Research Institute for Oncology and Medical Radiology. In 1978, Ivan Kanus defended his Candidate’s thesis entitled «Narcosis and postoperative period in patients with cervical cancer at surgical and combined treatment».

Since 1982, he had been working as an assistant at the Department of Anesthesiology and Resuscitation of Belarusian State Institute for Advanced Medical Training; from 1990 to 2004 — as head of the department. In 1990, he defended his Doctoral thesis entitled: «Integration and differentiation of intensive therapy in patients with acute renal failure of different etiology». In 1991, he got the academic title of professor.

His main scientific interest is anesthetic management and intensive therapy of emergency and critical conditions. He is an author 10 scientific works, 8 monographs and a computer program. He got 17 patents for invention and 25 certificates for rationalization proposals. Ministry of Health of the Republic of Belarus approved 20 instructions for the methods of diagnostics and treatment.

Last edit 2022-05-25 15:45:52
Our website uses anonymous data transmitted using cookies. 🍪 All your information is stored securely and is not shared with the third parties.