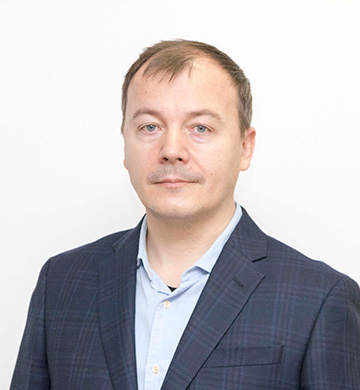 Oleg Yatskevich graduated from Military Medical Academy (St. Petersburg) with a degree in general medicine in 1996.

In 2002, he finished clinical residency course. In 2005, he graduated from Belarusian Medical Academy of Postgraduate Education, the Department of Maxillofacial Surgery.

In 2006, he defended his thesis for the degree of Candidate of Medical Sciences on the topic: "Bone grafting in the surgical treatment of congenital clefts of the lip and palate."

In 2013, Oleg Yatskevich completed an internship at the Royal Children's Hospital (Manchester, UK).

He constantly improves his professional level by taking part in republican and international conferences, congresses, and congresses.

He is a doctor of maxillofacial surgeons of the highest qualification category.

The main areas of activity: treatment of congenital malformations of the face and jaws, orthognathic surgery.

Last edit 2021-08-20 09:34:44
Our website uses anonymous data transmitted using cookies. 🍪 All your information is stored securely and is not shared with the third parties.