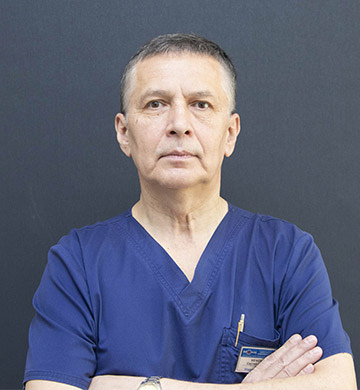 Associate professor of the Department of Plastic Surgery and Combustiology of BelMAPE, Candidate of Medical Sciences, surgeon of the highest category

Sergei Mechkovsky was born in the town of Vileika, Minsk region. After finishing secondary school in 1977, he was admitted to Minsk State Medical Institute, which he graduated from in 1983. He did internship at Minsk Regional Clinical Hospital from 1984 to 1985. Afterwards, from 1985 to 1986, he worked as a surgeon at Krupskaya Central Regional Hospital. At the end of 1986, he started to work at the Microsurgery Unit of Minsk Regional Clinical Hospital, where he had been working until 2013. During the period of work at the Microsurgery Unit, he performed the following operations: replantation of disconnected fingers and other segments of joints, microvascular autotransplantation of bones, gender reassignment surgery at     transsexualism, single-step fallourethroplastics at the loss of penis and in transsexuals and etc.

Sergei Mechkovsky has been working at BelMAPE since 2010: from 2010 to 2013. He worked as a lecturer at the departments of surgery and emergency surgery. Since 2014, he has been working as an associate professor at the Department of Plastic Surgery and Combustiology of BelMAPE.

In 2004, he defended Candidate’s thesis entitled “Microsurgical Reconstructive-recovery operations at tubal infertility and tubal pregnancy”. In 2016, he got the academic title of an associate professor.

He is a coauthor of the educational standard in plastic surgery. He is an author and coauthor of all educational guides, being developed at the department. Sergei Mechkovsky is an author of more than 100 scientific and educational guides, including 1 monograph, 20 patents, inventor’s certificates, 3 instructions of the Ministry of Health of the Republic of Belarus. He regularly participates at different republican and international meetings, conferences, symposiums.

Last edit 2021-08-24 10:43:15
Our website uses anonymous data transmitted using cookies. 🍪 All your information is stored securely and is not shared with the third parties.