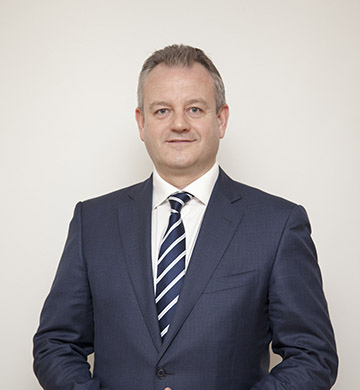 Sergei Rubnikovich was born in Vitebsk region. In 1996, he graduated from Minsk State Medical Institute, Faculty of Dentistry. In 1998, he completed clinical residency in orthopedic dentistry at the Department of Prosthetic Dentistry BelMAPE. Since 1998, he worked as an assistant, and then since 2004, he had been working as an associate professor at the Department of Prosthetic Dentistry of the Belarusian State Medical University.

From April 2013 until the present, he has been working as head of the Department of Prosthetic Dentistry and Orthodontics with the course of Pediatric Dentistry of BelMAPE. In 2002, he defended his Candidate’s thesis entitled "The choice of the stump pin inlay and pin teeth, taking into account the safety of the walls of the root canals (experimental clinical study)." In 2011, he defended his Doctoral thesis entitled "Laser-optical diagnostics of periodontal diseases and substantiation of methods of their treatment (experimental clinical study)." In 2015, he was awarded the academic title of professor.

Professor Sergei Rubnikovich is the founder and head of the scientific school of dentistry using cellular and digital technologies. The results of scientific research have been recognized in the Republic of Belarus and abroad, as evidenced by scientific publications and speeches at major international conferences and congresses, as well as repeated citations of publications by foreign authors. During his scientific career, he published more than 450 publications, including 7 monographs, 35 book publications, 300 articles in leading domestic and foreign publications, 20 patents for inventions, the author of 19 instructions for use approved by the Ministry of Health; he has more than 250 acts, which have been implemented into practical health care and educational process.

Over the past five years, under the scientific supervision of professor S.P. Rubnikovich, 6 joint funded projects have been and are currently being carried out within the frameworks of scientific and technical programs of various levels. Thus, as a result of the task “Acoustic system and ultrasonic equipment for the formation of a dentin-filling joint (2013-2016, state registration number 20132596), for the first time in the Republic of Belarus, a domestic modern low-frequency ultrasonic dental apparatus for the formation of a dentin-filling joint“ DENT-35 " had been worked out. This development, presented in the frameworks of the international competition "The best innovative project and the best scientific and technical development of the year", which took place in the Russian Federation in St. Petersburg (March 12-14, 2019) in the nomination for the best innovative project in the field of medicine was awarded Diploma of the II degree with the presentation of a silver medal.

As a result of the implementation of a separate project of fundamental and applied research of the National Academy of Sciences of Belarus "To conduct experimental and clinical trials of a biograft based on mesenchymal stem cells of adipose tissue, immobilized on a biodegradable carrier, for use in the treatment of periodontal diseases" (deadline: 2016 - 2018, state registration No. : 20164574) for the first time in the Republic of Belarus, a new method of cellular technologies in the treatment of gum recession using a mixture of autologous mesechimal stem cells of adipose tissue with collagen gel 7% has been developed and introduced into dental practice.

As part of the task "To develop a method of treating patients with obstructive sleep apnea and snoring using an individual intraoral device", the State Program of Scientific Research "Basic and Applied Sciences - Medicine", the subprogram "New technologies for the relief of diseases" (deadline: 2018 - 2020) new dental evidence-based approaches are being created in the diagnosis and treatment of patients with obstructive sleep apnea syndrome and snoring using individual dental devices.

As part of the task "To develop a biomedical cell product based on mesenchymal stem cells, their osteogenic differentiated analogs, immobilized on a biodegradable carrier, for the treatment of moderately severe chronic periodontitis" equipment "for 2016 - 2020 (section" Molecular and cellular biotechnologies ") (deadline: 2018 - 2020) a new method of treatment of dental patients with severe periodontal disease using cellular technologies is being developed.

Since 2013, Sergei Rubnikovich has organized 6 international congresses, 10 international conferences and 26 city and regional scientific and practical seminars, as well as 45 master classes in various sections of dentistry.

Last edit 2021-08-24 11:53:44
Our website uses anonymous data transmitted using cookies. 🍪 All your information is stored securely and is not shared with the third parties.