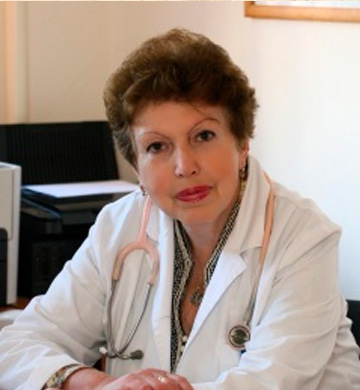 Associate professor of the Department of Pediatrics

From 1970 to 1974, she worked at the pediatric sanatorium «Pukhovichi», where she was involved into scientific work – she studied circadian rhythm in children with bronchopulmonary pathology. The results of the conducted work were published in a scientific journal.

From 1974 to 1976 – clinical residency at the Department of Pediatrics on the specialty «Pediatrics» at Belarusian State Institute for Advanced Medical Training (at present - BelMAPE).

In 1975, she got involved into the study of arterial hypertension in children and teenagers.

Since 1976, Svetlana Korol had been working at the Cardiology Unit of Minsk Regional Clinical Hospital, where she rendered emergency and advisory medical care to children of Minsk region.

Since 1983 until the present, Svetlana Korol has been working at the Department of Pediatrics of Belarusian Medical Academy of Postgraduate Education.

In 1986, she defended her Candidate’s thesis entitled «Clinical value of changes in lipid spectrum of blood plasma in children with arterial hypertension».

Svetlana Korol is an organizer and active member of the school of the prevention of arterial hypertension and metabolic syndrome in children.

In 2000, she got an award for excellence in healthcare of the Republic of Belarus.

She is an author and coauthor of 210 scientific works, 5 monographs.