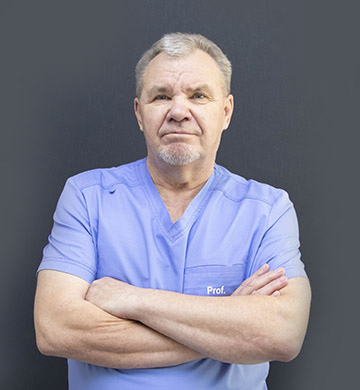 Head of the Department of Honored physician of the Republic of Belarus, Doctor of Medical Sciences, professor, surgeon of the highest qualification category

Vladimir Podgaisky was born in the family of physicians in the town of Nesvizh, Minsk region. In 1978, he graduated from Belarusian State Medical Institute with a specialty in general medicine. After the internship in surgery at Minsk Regional Clinical Hospital, he worked as a surgeon at Logoisk Central Regional Hospital of Minsk region. In 1980, he started to work as a surgeon at the Vascular Surgery Unit of Minsk Regional Clinical Hospital, where he had been working for 5 years. During his work at the unit, he became involved in microvascular reconstructive surgery. In 1985, Vladimir Podgaisky became head of the Microsurgery Unit being created at that time. Since the time of its foundation, it has been a clinical base of surgical department of BelMAPE. In 2005, at the department there had been organized a Course on Plastic Aesthetic Surgery.

His scientific interests are the following ones: development and implementation of new methods of reconstructive microsurgery, organization of emergency, 24-hour microsurgical care to patients with traumatic amputations of segments of limbs, nerves, ligaments for initial reconstruction of damaged structures and replantation of limbs and their segments; innovation technologies of new kinds of microsurgery  reconstructive-reparative operations on lymphatic vessels, fallopian tubes and vas deferens at infertility,  peripheral nerves, vessels, ligaments at long-term damages, and also straight and indirect revascularization   of limbs with the help of microsurgical technologies.
Vladimir Podgaisky and other specialists of the Microsurgery Unit performed the following operations for the first time in Belarus: replantation of severed fingers and other segments of limbs, autotransplantation of compound flaps on microsurgery
anastomoses, microsurgical autotransplantation of bone, gender reassignment surgery, single-step phallourethroplasty at the loss of penis and etc.

Vladimir Podgaisky is an author of more than 200 publications, among them there are 2 monographs, 26 patents and author's certificates of the Republic of Belarus.